They always say time changes things, but you actually have to change them yourself. 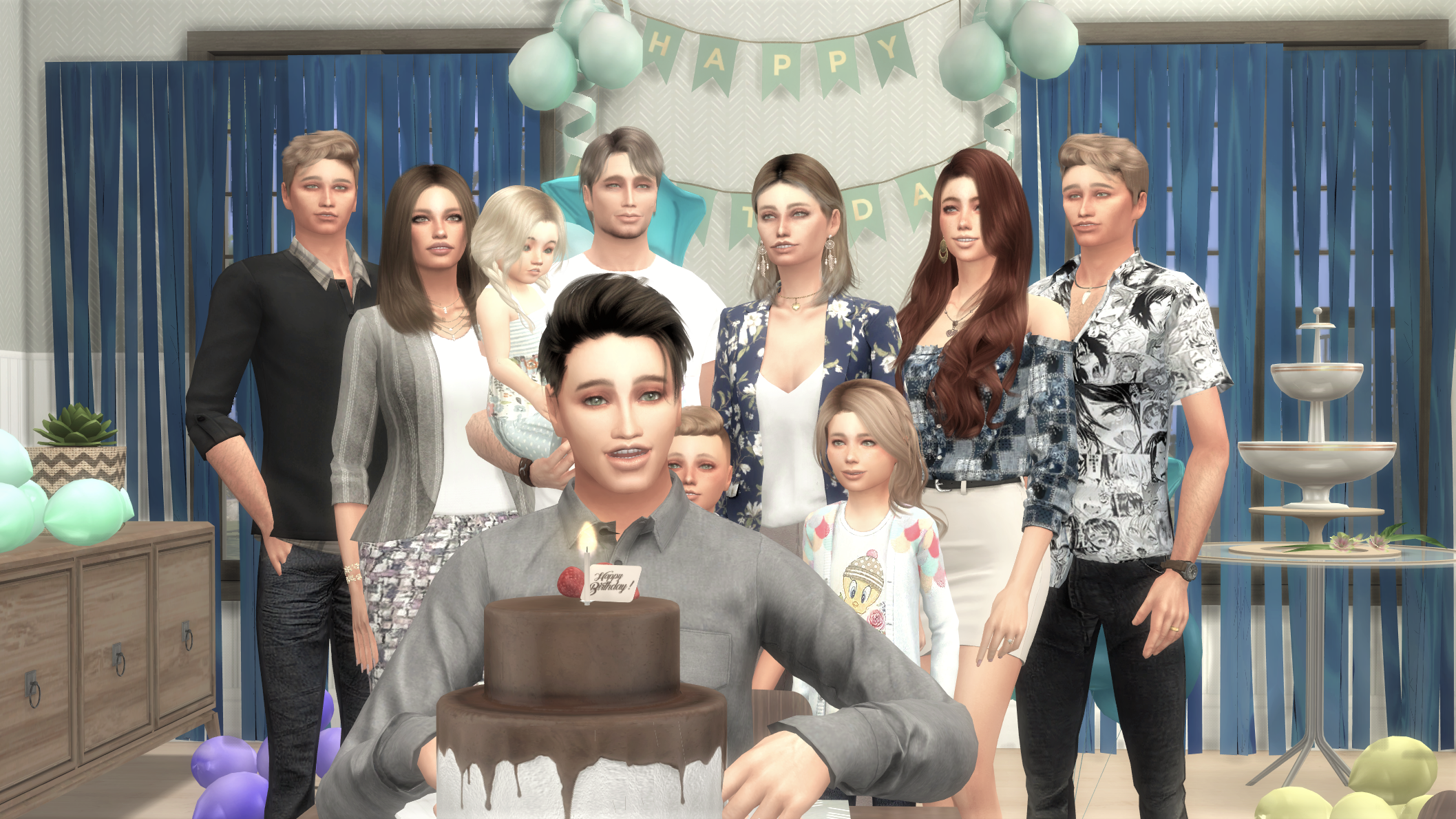 Blaine exited Cameron Estate through the back door when into the temporary ringing in his ears – caused by the sudden silence after the loud party inside – he noticed someone to his left. Even blinking into the blinding sunlight he could easily recognize the outline of one of his twin cousins, either Jamie or Jordan, since they were identical, considering this was Jamie’s home and his oldest son’s 13th birthday, Blaine went with assuming it had to be him trying to flee from reality for a little while.

“James Brendan Cameron … whatcha doin’ out here when the party is inside?” he roared, purposely a few dozen decibels louder than necessary.

With a satisfied chuckle, he noticed the intended effect of his sudden loud address on Jamie, who winced, then snorted a laugh as he watched his cousin join him sitting on the steps which lead from the patio into the grassed area of the large backyard.

“What do you think? I am hiding. You are next with your Vivien. Not so little anymore already, but I tell you what: once they start those never-ending growth spurts, and especially once the day of their actual birthday comes, it seems like you put a child to bed and woke up to a teen, mood swings and all. Liam has never been the easiest kid, Avie and I are worried about what’s ahead. He already banned us from dropping him off on his first day at junior high. Too mature for his parents, but you still have to get him to do any chores at gun point. Mature, my ass. Tssk!” Jamie told him.

“Ah, that son of yours is golden, just hormones fucking with him. Speaking from experience here, man, what haven’t I done that was wrong? Just admit it, him turning 13 makes you feel old! That’s what gotcha.”

“Hardee har har – straight back at ya, old man, you are actually half a year older than me. And thanks for that failed pep talk! If my son turns into you when you were his age, he’s going up for adoption, I swear! Or on ebay, Craig’s List. Maybe Etsy, after all, he’s definitely homemade. Ha ha ha. But in all seriousness now, just know I will remember your jokes in a few months when your kids have their birthdays. Just you wait, my friend. You celebrating Vivien and Blake’s birthdays together again?”

“Yeah, just easier that way and they don’t care, esp. not Blake, since it means he gets his presents two weeks early and another one on the actual day, that little extortionist. Mostly the same crowd of guests for both anyway and none of them could fly out to Del Sol Valley twice in just a couple weeks. Say, since when does straight-laced Jamie smoke? It’s always the silent waters …”

“I don’t smoke. At least not really. Only when I am stressed, and I am stressed. I think the last time was in college, during finals. Man, it feels like we just got into college. How can we have teens on our hands already?”

“Tell me about it. My mom and dad are worse. In our business you can’t get old. Especially my mom. I swear she’ll move in at the spa soon. Or her hairdresser.”

“Your mom looks great, as does your dad. Look at the rest of us who are not wealthy celebs. Nobody does spas and all that here in the boonies, it’s the simple life and we all age. Avie just can’t seem to lose the baby weight anymore and my dad has a serious dad bod. My mom is fit, but going gray and resends the idea of dying her hair. I feel like 80 years old half the time, either because of work or the kids. A toddler and a teen in the same household, I tell you what. Luckily my middle one, Leonie, is in grade school and an angel. Why can’t the other two be like that?” Jamie let out a sigh.

“My mom and dad would be grey too, were it not for very talented and expensive hairdressers they have been going to for years, who keep their locks as they had always been. You didn’t hear that from me, but both been getting Botox for years. Dad didn’t at first, always made fun of mom, then one of my fans called him ‘old man’ and he went off the rocker. And I will probably be even worse, considering I will also have to keep up with Scarlett. She already gets mistaken for Vivien’s older sister. I mean, WTF, right? Hey, hook a brother up, dude. I am stressed now too.” letting out a deep sigh, Blaine pointed at Jamie’s cigarette, which he handed over.

“Yeah, where is that going with you two? Any plans involving an altar?” Jamie wondered.

“Argh – who knows? I am afraid to even mention it, so she won’t go running on me again. Scarlett has so many hang-ups about this mortal and vampire relationship, it’s ridiculous. She is the easiest person for me to talk to, I always felt like I can be 100% myself around her – unless it comes to us as a couple. I mean, you know the whole story from the beginning. Theoretically we could get married, far as I know she still has all the documents, Leonardo never undid all that, probably cos he’s afraid of the wrath of Scarlett’s lil brother, Caelan, aka. ‘Chtulu’. After they broke up he had a ‘talk’ with him, scared him into submission.”

“Thought her ex’s name was Lorenzo.”

“Lorenzo, Leonardo, what’s the difference? Some arrogant Italian who is history – luckily.”

“If I were you I would take her out to a nice, romantic dinner and then gently lead up to you wanting to make it something real. Feel her out in the right setting, go slow, asking careful questions about her thoughts on moving in with you or even marriage. Or just take her somewhere with meaning for the two of you and just propose and see what happens.”

“A dinner? You know Scarlett doesn’t do dinners. She can’t, remember? And the most special place we share is Everett Heights. Not sure proposing at a teen hangout slash family BBQ spot way out in the sticks would be considered that romantic, all things considered. Maybe if we were teens, but not now.”

“Right, fine, take her out for a movie or drinks then. Whatever you usually do with her, just more upscale. Make it extra special. And gimme back my smoke. You were supposed to have a few draws, not keep as free gift with purchase! You are the wealthy one here, you can buy a whole cigarette factory, I have to sneak mine so I don’t get put on trial by the wifey. Or by my mom. Or my dad. Or set a bad example for my son, the human personification of a tornado. Whatever you tell him goes in one ear and out the other, unless it’s a bad habit. That kid’s got that down instantly.”

“I appreciate you trying to help, but the problem is that what Scarlett and I usually do whenever there are no kids around is screw. I like to think I hold myself to pretty high standards there already, so no idea how to get more upscale. And I know how to do a lot of things between the sheets, but even I cannot come up with a romantic proposal while about to pop. Know your limits, ya know?” Blaine snickered.

“Argh – TMI! Bring it in, give your brother from another mother and father a bro hug and then I am going back inside before you do the Blaine thing and go into bedroom details! No thanks!” Jamie groaned, then the two men hugged.

A few months later Blaine didn’t find the birthday party of his own kids a matter for amusement at all. Quite the contrary. His heart went from pounding to stopping over and over.
Could it really be?
His babies?
Where had time gone?

Vivien and Blake both had several growth spurts behind them, whenever he went on a tour for longer than a few days or when they went to stay with their respective mothers for a while and came back he barely recognized them and they kept outgrowing their clothing.

Whenever Vivien had friends over Blaine had to do double takes to remember that was his ‘little’ girl among them.

Now here they were, about to celebrate Vivien’s 13th birthday and Blake’s 6th. He could still remember him just born like it was yesterday.

Things between him and Blake’s mother Bristol were okay, not great, but not bad either and he had no real opinion on her new husband. Cole usually kept far in the background whenever Blaine came over to drop off Blake for his scheduled shared custody visits and Blaine never disabused him of the notion that he preferred it that way. Regardless how you felt about an ex, seeing them with a new partner is never easy.

At Scarlett’s home at Vatore Castle there was always the risk to run into her brother, Caelan, which often ended in unnecessary drama and always with an argument between the two men, until one of the other Vatores separated them.

It would have been so much easier if Scarlett would just move in with him. But she didn’t seem too keen on that idea. The few times he had dropped careful hints about it, she had quickly changed the topic by talking about how much she loved Vatore Castle and how rough it had been to live with Lorenzo during their short marriage.

A problem with no solution?
Or a problem that just needed more time?
Or a problem he needed to just bite the bullet, man up and bring onto the table as Jamie suggested?
And – did he really want to get married again?
What was the point?
Right?